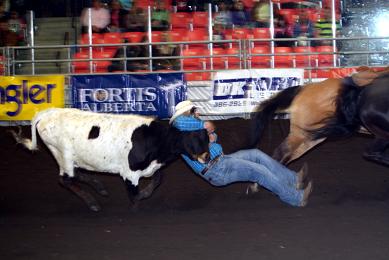 
(BGR) Everybody knows how much fun it is going to the Black Gold Rodeo. They know all about the great activities that are on offer during the excitement of Rodeo Week. However, there are other, lesser-known facts about Leduc's annual summer roping and riding festival that you may find interesting.

The BGR is in the top 15 rodeos in Canada in terms of number of competitors and the amount of prize money.

Almost 400 cowboys from all over North America take part in the competitive rodeo events at the BGR.

One special guest of the 2015 Black Gold Rodeo was the lovely and well-spoken Katy Lucas of Gibbons, who was crowned Miss Rodeo Canada 2015 at the CFR. Although she reportedly has scheduled between 400 and 500 public appearances during her reign, she still made time for Leduc!

Volunteers put in over 5000 hours to make the Black Gold Rodeo happen for us all. If you see a volunteer, give them a big, "Thank you!"

Just the rodeo alone entertains over 4000 people during the course of the weekend.

Cowboy hats have turned up sides so that three cowboys can ride in the front of a pickup comfortably.

The BGR awards thousands of dollars in scholarships annually to area students via the Harvey Northcott Memorial Fund.

The word, 'rodeo' is Spanish for "I surround".

2015 marks the 25th anniversary of the BGR's Rodeo of Smiles, which allows handicapped and special needs children, from the regional community, to engage in fun-filled rodeo rides and games. The kid-centric activities included simulated bull riding and calf roping, carnival games, "gold panning", a petting zoo, face painting, mascots, chuckwagon races (pulled by teen-aged football players from Leduc High School) and many others.

The BGR Trade Fair, now in its fifth year, is possibly the best-attended event in Leduc's annual entertainment calendar, drawing over 12000 people over the course of the rodeo. This is approximately half of the population of Leduc!

The first Hollywood movie made about rodeo was Rodeo King and the Senorita, released in 1951 by Republic Pictures, It starred Rex Allen and Mary Ellen Kay.

It takes over 100 volunteers to put on the Rodeo of Smiles for physically and mentally challenged youth in the greater Leduc area.

The City of Leduc has held the Black Gold Rodeo every year since 1969; that's over 45 years of rodeo fun for everyone!

The founder of the Black Gold Rodeo, Harvey Northcott, was inducted into the Canadian Professional Rodeo Hall of Fame in Calgary in 2012.

There were over 360 volunteers who donated their time toward making the 2014 Black Gold Rodeo the enormous success that it was. The need for new volunteers never goes away. Call us if you have time to spend on this great event!

The BGR prize purses total an impressive $30,000. As well, points earned at the BGR go toward the "Cowboy of the Year" competition through the Canadian Professional Rodeo Association.

Roper Shane Hanchey of Sulphur, Louisiana, who won the BGR Tie Down Roping event in both 2014 and 2015, has a sideline in betting on NFL games.

The year 1994 featured the release of more rodeo movies than any other year with The Cowboy Way (Woody Harrelson and Kiefer Sutherland), 8 Seconds (Luke Perry and Stephen Baldwin) and the documentary Colorado Cowboy: The Bruce Ford Story.

Steer wrestler, Clayton Moore of Pouce Coup, BC, who won that event at the 2014 BGR and was tied for second in 2015, is a hunting guide in the off season.

Rodeo is a large contributor to Alberta's tourism numbers, with that sector of the provincial economy accounting for almost $8 billion of our provincial GDP.

Mike Kuefler, BGR Association chairman, when asked what organizing a large rodeo is like responded, "You know rodeo; it's just one bucking thing after another."

As you can see, there is a lot more than meets the eye at the Black Gold Rodeo. With 2015 being such a great success, the BGR Association is already looking forward to next year.