Pro riders from across North America will show off their skills in seven very different rodeo events at the Black Gold Rodeo. You won't want to miss a minute of the edge-of-your-seat action! Tickets for all four Pro Rodeo performances are available.

Each of the four days of Pro Rodeo include the main seven events, just with different competitors. 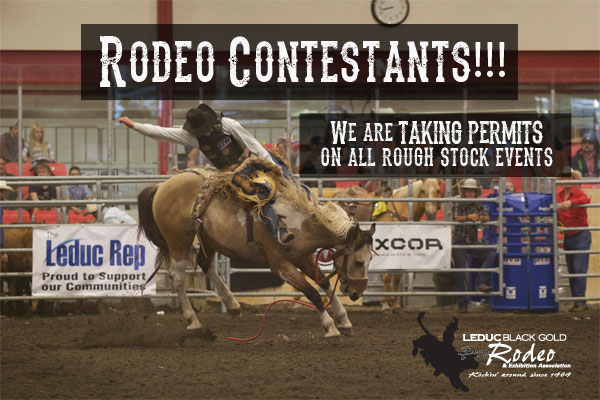 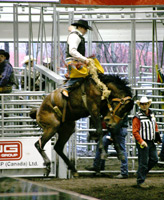 For his ride to qualify, the Saddle Bronc rider must have his spurs over the break of the horse's shoulders until it completes its first jump out of the chute.
He will be disqualified for touching any part of the animal or equipment, for losing a stirrup or for getting bucked off before the end of the eight-second ride.
Every rodeo event has one key component the rider must master to achieve success. In the Saddle Bronc competition, the key is maintaining a good rhythm. The rider must spur from the animal's neck in time with the bronc's bucking action, using a full swing toward the back of the saddle with his toes pointed outwards.
The Saddle Bronc competitor's equipment includes his own CPRA-approved saddle, spurs with dull rowels (the revolving disk at the end of each spur), leather chaps and a braided rein.
The length of the rein is crucial as it can make the difference between staying on the bronc for the full eight seconds or being tossed off too soon. To keep from being pulledo out of the saddle and over the front of the horse, the cowboy maintains his balance by carefully adjusting his grip on the rein. 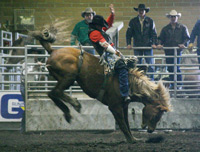 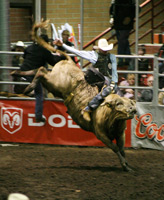 A braided manilla rope is the cowboy's only security as he ride's a wildly bucking brahma/cross bull across the arena. The rope is wrapped loosely around the bull and a weighted cowbell hangs underneath.
When the ride is over, the cowbell pulls the rope free.
The Bull Rider will be disqualified for touching the bull with his free hand or for being bucked off before the end of the eight-second ride.
As it is tremendously difficult just to remain on top of one of these loose-hided animals, Bull Riders are not required to spur.
Successful Bull Riders have the ability to keep themselves close to their handhold throughout the ride. This prevents the holding arm from straightening, which could jerk his hand loose.
Bull Riding is the most dangerous of all rodeo events. It requires that a bull fighting clown be in the rodeo arena during each ride.
As the cowboy dismounts, or if he is thrown from the bull, the bull fighter distracts the animal until the rider can safely exit the arena.

Truly a team effort between the cowboy and his horse, tie-down roping demands split-second timing as the two race against the clock to catch and tie a calf.
The calf must cross the scoreline before the rider breaks the barrier (a rope across the chute) or a ten-second penalty will be added to his score.
After roping the calf, the cowboy runs down the rope and throws the animal by hand. More time is lost if the calf is already down when the roper reaches the animal because the calf must be standing before the cowboy can throw it down.
The cowboy must tie any three legs of the calf with a pigging string. The tie must hold for six seconds or the rider will be disqualified.
The horse must be able to judge the speed of the calf, be able to stop on cue in a single stride and then hold the rope taut when the rider runs to the calf. Finding a horse that can be trained to do all this well is a difficult task.

Timing, co-ordination and strength are essentials for a Steer Wrestler. The steer is given a head start and must cross the scoreline before the rider breaks the barrier of the starting box. If the rider breaks the barrier prematurely, ten seconds are added to his time.
Coming out of the starting box, the horse runs alongside the steer and is trained to run on by as the Steer Wrestler reaches for the steer. With a firm grip on the steer's right horn, the cowboy hits the ground with his legs extended forward, brings the steer to a dead stop and then, using his left hand as leverage under the steer's jaw, he throws the steer off balance and wrestles it to the ground. The steer must be flat on its side before an official time is taken.
This event requires an extra horse ridden by a hazer, whose job it is to keep the steer running as straight as possible.

In Barrel Racing, the only ladies event in professional rodeo, the contestant must cross the scoreline and run a cloverleaf pattern around three barrels before coming back across the scoreline to register an official time.
The rider can circle either the left or right barrel first but must follow the cloverleaf pattern to avoid disqualification.
A five-second penalty is added to her time for every barrel she knocks over during the ride.
Contestants are permitted to use their hands to prevent a barrel from falling.
The time is generally recorded to the hundredths of a second using an electric eye.

Two cowboys, a 'header' and a 'heeler', work to rope a steer in the shortest time possible. The steer gets a head start before the header leaves the box.
The header throws his rope to catch the steer with one of three legal head catches: head and one horn; neck; or both horns.
If the cowboy fails to give the steer a head start, the team receives a 10-second penalty.
Once the header has caught the steer, he wraps the rope around the saddle horn (dallies) and turns left with the steer in tow. The heeler then ropes both hind legs of the steer and dallies his rope.
Once the slack has been taken out of both ropes and the contestants are facing each other, the flag drops and time stops. If the heeler only catches one leg, a 5-second penalty is added. If the heeler throws his loop before the header has turned the steer left, that is called a 'crossfire' and the run is disqualified.