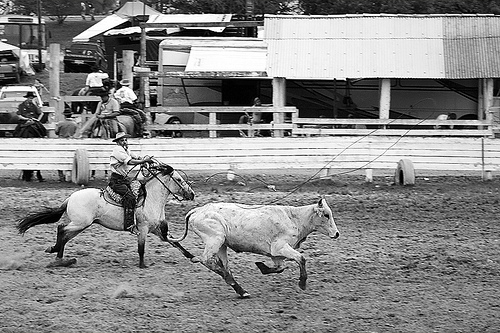 From BGR's Beginnings to the Rodeo Hall of Fame


One of the Founding Fathers of the Black Gold Rodeo

The name Harvey Northcott had been virtually synonymous with the Leduc Black Gold Rodeo since he helped start the event in 1969 along with Bill "Stoney Burke" Pollock and Bob Robinson. An aspiring rodeo competitor himself, Harvey was well-known in area rodeo circles for keeping a number of practise animals on his ranch in southern Alberta. Therefore, when the nearby community of Carseland wanted to start an annual rodeo, the organizers asked Harvey to provide the stock for the competitors to ride.

A Bucking Business is Born

This opportunity provided Harvey with the impetus to start a business in supplying bulls, broncs and heifers to rodeos all over North America in 1967. Just two years later, Harvey used the knowledge he learned about rodeos to help create Leduc's first rodeo under the auspices of the Foothills Rodeo Association, a rodeo body still operating today. It wasn't until 1970, however, that the rodeo was paired with Leduc's popular Black Gold Days to produce the Black Gold Rodeo which we know and love.

Saved By the Lions

Although the initial years were pretty lean for the group, they managed to grow and prosper with the asistance and resources of the Leduc Lions Club.  Other groups also joined the fun with the Elks Club of Leduc playing a major role in the Rodeo of Smiles.

Just Desserts for a Founding Father

Harvey worked as hard at his business as he did at promoting the sport of rodeo throughout the province. As a result of his efforts, in 2012 the revered stockman was posthumously inducted into the Canadian Professional Rodeo Hall of Fame In Calgary.

The name Harvey Northcott will remain alive in the hearts of Black Gold Rodeo fans far into the future thanks to the annual scholarships that were created in his name by the BGR organizing committee. Harvey's positive influence on the sport is reflected in the fact that he continues to encourage rodeo in our province, even after his passing. The Black Gold Rodeo Association salutes Harvey Northcott and his belief that rodeo horsemanship is an integral part of Alberta's past and must be preserved into the future.

Unaltered Photo: Some Rights Reserved by Alexandre Periera Flickr photostream, Alberta Elections, nor this article endorsed. The original image can  be located here.