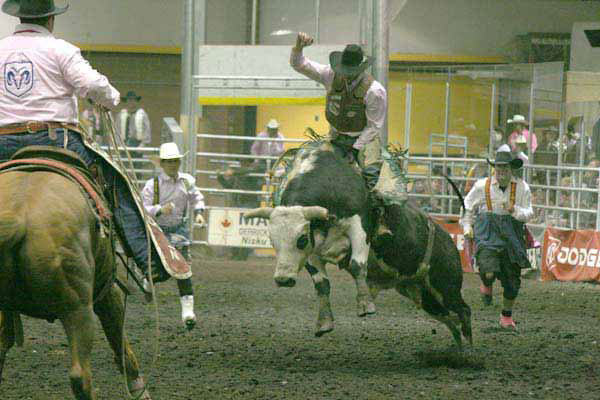 
The 2016 edition of the Leduc Black Gold Professional Rodeo was a fantastic weekend of superb rodeo action with sell-out crowds both Friday and Saturday night. The unofficial results of the CPRA-sanctioned riding and roping events have already been posted on the CPRA website so we are going to share a bit about the winning riders. It is heartening to see that local riders from neighboring municipalities such as Thorsby, Ponoka and Lacombe were well represented in the winners' circle, as well as a healthy contingent of riders from across North America. Leduc can be proud their rodeo is ranked among the top 15 in the nation as measured by the prize money distributed to the winning competitors.

The winner of this event was Roblin, MB native, Orin Larsen with an 85.5 point ride on Fat Albert earning him the $1600+ prize purse. Orin and his brother, Tyrell, have been regulars on the rodeo circuits across North America in the past couple of years and the duo were the first two Manitobans in the history of the U.S. National Finals Rodeo to qualify for that prestigious competition.

Pride of Chauvin, AB, Layne Delemont, was the big winner in the Steer Wrestling event with a 3.8 second time. Layne led by just .2 of a second over his nearest competitor to capture the purse worth just shy of $2000. Prior to the Leduc weekend, Layne had earned just $163.56 on the CPRA circuit this year.

A pair of brothers scooped up second and third place when Stony Plain cowboys, Derek Frank and Dallas Frank finished with times of 4 and 4.2 respectively, earning Derek almost $1800 and older brother Dallas $1567. The cash the brothers received will most certainly help their CPRA standings which had them short of the Top Ten prior to Leduc.

The winning pair in the Team Roping competition was Montana native Dustin Bird and his roping partner, Oregonian Russell Cardoza with a 4 second time; which earned them just over $1700 each. Bird is a big fan of the Canadian circuit and lists Alberta as his "second favourite place to rodeo"; right behind his home state. Fellow Albertans, Brett Buss of Ponoka and Airdrie's Klay Whyte were the second place team with a time of 4.1, which was good enough for $1480 each and may help them in the national standings which had the duo listed in second place before their Leduc results were counted. The third place pair, both sporting out-of-province plates, were Colton Melby of Burneyville, OK and Lucas Falconer of Comox, BC. Their 4.2 second finish earned each cowboy $1258.

Sam Kelts from Stavely, AB who, before the Leduc events, was listed in 2nd place in CPRA Saddle Bronc standings, won the event with a score of 82.5 aboard 725 Honky Tonk. His winning ride earned him the $1874 prize and may vault him into first place nationally, depending on the weekend results from Canadian leader Dustin Flundra.

Kelts' finish was a full second ahead of runner-up, Audy Reed, who pocketed $1539 from that performance. In third with a score of 80 was Lane Cust from Alberta's favourite beach town, Sylvan Lake.

Rehn Richard of Roosevelt, Utah was the sole winner of this event with a quick 8.4 time to earn $1967.

The second place prize of $1693 was a tie at only .1 second slower and won by local hero, Erik Dublanko of Thorsby and Carstairs cowboy, Kyle Lucas. Even prior to his Black Gold Rodeo finish, Erik was in the Top Ten for CPRA Tie-Down Roping standings for the year.

The Barrel Racing event was won by Brooks, AB rider, Lynette Brodoway who, prior to her event-busting 13.327 second performance, was listed in 5th overall in this year's CPRA standings. Medicine Hat Miss, Steffanie Mather more than doubled her year's earnings with her second place finish of 13.381, for which she earned $1789. Cranna Roberts of Lacombe, who was ranked in second place in the national standings prior to this event, won the third-place purse of $1474 with a time of 13.457.

Garrett Green of Meeting Creek, AB was the big winner in the Bull Riding event with an 87.5 point ride atop Z23 Disco. The $1579 prize will likely help raise Garrett national standings, which had him in 6th place, but only a couple hundred bucks shy of the Top Five prior to his first place performance in Leduc. Behind Garrett was Tyler Pankewitz of Ponoka who nabbed nearly $1300 with his remarkable 86 point ride which almost triples his pre-Leduc 2016 rodeo earnings. Third place, along with the $1015 in prize money went to Cadogan, AB cowboy, Lonnie West who was 7th in CPRA standings before this finish.

The rodeo stock was provided by Northcott/Macza Rodeo.